Matthew J. Evans
Alistair is an exchange student from Ireland. Alistair is good at mimicking accents. He was suspected of being another bionic spy like Marcus by Adam and Bree. However, after several tests which hurt him very badly, they deemed that he was not a bionic spy after all. He is portrayed by Matthew J. Evans.

Alistair seems to be kind, but also arrogant at some times. 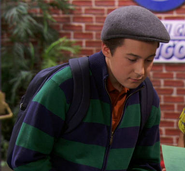