As the Lab Rats return from a mission, Chase feels like the odd man out, after Adam and Bree are given all of the credit for the mission's success. Out to prove himself, Chase heads to the Arctic to retrieve rare minerals that Davenport needs for an invention, but finds himself trapped in an avalanche. Meanwhile, Leo invites Janelle over and things go a little awry.

After returning from a mission, Chase is annoyed that he isn't being credited enough for his smarts, and only his siblings get the credit. The matter is quickly put aside, no one really taking an interest in it. Donald shows off a new invention: a Cryoblaster. Donald then tells them about their new mission, which is to travel to an remote place in Antarctica to collect a rare material for his machine, Cytanium. When Donald finds out that a 'Category 5' storm is approaching he calls off the mission. Chase objects Donald, saying that they could do it. Adam and Bree tell him not to worry about it and leave. Ignoring Davenport's orders, Chase goes anyway to prove that he can be as good as Bree and Adam even if he doesn't possess their enhanced speed or strength. Donald finds out about Chase's whereabouts once Bree questions his absence. On the com-set, Donald warns Chase of an approaching avalanche that will hit any second. Chase reassures him that he is fine and that he is collecting the last samples of the mineral needed. But before Chase knows it, the avalanche hits and Donald loses contact with him. Hope is not lost, though, and Donald sends Adam and Bree on a rescue mission to save Chase.

Douglas finds and rescues Chase first. Chase learns that he had been stalking them, or as Douglas would call it, "lovingly lurking in the shadows", and that Adam and Bree were retreating and not coming for him. Douglas then tries to persuade Chase to join his side, telling him that he understands the difficulties that Chase is going through, can help him achieve "all that he were meant to be" and give him Adam's and Bree's abilities (and many others) as well. Chase doesn't know what to choose, and Douglas adds another reason why Chase should join his side. "The same family that mocks you and never gives you the credit that you deserve?" Chase then agrees to help him, asking "What would I have to do?" Douglas explains to him that they need to get to the lab to use Donald's gadgets to download Chase's bionics into his chip. Chase sneaks Douglas into the lab, and as the download is being completed Donald, Adam, and Bree enter the lab. They are surprised to find Chase there, unharmed.

Meanwhile, upstairs, a study session with Janelle turns into disaster when Leo accidentally freezes her with the Cryoblaster. He tries to think of ways to unfreeze her, while hiding his frozen friend from his mother. Tasha finds out eventually and is enraged. She tries to take the Cryoblaster away and Tasha gets frozen by it as well. Leo soon receives a phone call from Janelle's mother informing him that she was coming to pick her up soon. Leo, now desperate to unfreeze the two people in the ice cube, runs down to the lab for help.

Leo barges into the lab, saying: "Alright Big D, I know I'm not supposed to touch your stuff, but you know how things happen when you really don't want them to happen and that just happens to be what just happened. Upstairs.", not realizing the presence of Douglas. When he does, he gets scared, letting out a scream. Douglas goes on to explain that Chase is now on his side and that the download is complete, Chase will have all three bionic abilities. To Douglas' surprise, he learns that Chase double-crossed him. Chase states that "Even if you could offer me any ability there is, I would never join your side". Douglas finds himself in a tight situation and takes out a hidden weapon to use against the family, but Chase freezes him with the Cryoblaster before he could do any harm.

As the family are thinking of what to do with "Frozen Uncle Dougie" Leo tells his family of the problem that is awaiting upstairs. In the end, Adam uses his laser vision to melt Tasha and Janelle. 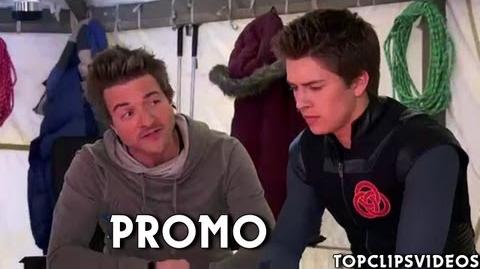 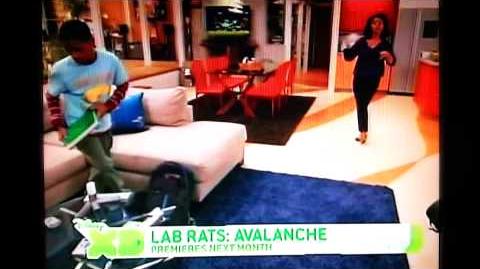