When Leo and his mom, Tasha, move into his step-dad, Donald Davenport's house, Leo discovers three bionic, super-human teens named Adam, Bree and Chase living in a secret underground lab in Donald's high-tech home. He takes the teens to school for their first time, where their lack of experience with the outside world causes chaos, prompting Davenport to ban them from ever leaving the lab. However, Leo, in appreciation for making him more popular by using their bionics, throws a party for Adam, Bree and Chase in Donald's house, only to get caught when he and Tasha walk in during the festivities.

After Adam, Bree and Chase disobey Davenport's orders, he decides it's best they are sent to a top secret facility in the Arctic. To replace them, Davenport creates robot versions of them to hang out with Leo, but the Lab Rats switch places with the robots. However, Tasha decides that she doesn't want Leo to hang out with robots (finding them creepy) and tells Donald to recycle the robots, not knowing they were the real kids. Once at the recycling plant, Adam, Bree and Chase use their bionics to avoid the various hazards, but must go back when Leo jumps in, hoping to rescue them, before Leo finds the "Off" button. When Davenport sees the kids risk their lives for each other, he decides to let Adam, Bree and Chase stay, as long as they can control their glitches.

After moving into the Davenport Mansion as his new home, Leo discovers three superhuman teens, Adam, Bree and Chase, living in a secret underground lab in the high-tech home he shares with his new inventor stepdad, Donald, his mom, Tasha, and Eddy, the "smart house" computer system. Davenport tries to cover up the three, but he then reveals that they are genetically engineered superhuman siblings each with a bionic set of abilities controlled through a micro-chip in their neck: Adam has superhuman strength, Bree has super speed and agility, while Chase has super senses and a superior intelligence. Leo takes the trio to school, having to deactivate Eddy in the process, but they are unable to control their abilities and cause a fiasco during the school pep rally. Adam's flame vision glitches and sets Dooey Dingo's head on fire, and this causes the cheerleaders to run after they had tossed one into the air. Bree unsuccessfully tries to catch her.

After school, Davenport confronts the kids, telling them he had to write a $30,000 check to the school, and bans Leo from the lab and sentences the Lab Rats to have no contact with the outside world. Despite the warning, Leo brings a party from school to the house, but they are caught once more. Davenport decides to relocate the Lab Rats as a punishment, and a possibility to finish their training. Adam, Bree, and Chase cannot believe that this is their final day in the lab.

The Lab Rats remember a fond memory they had in the lab as children:

A younger version of Davenport is finishing up reading a story of how batteries are made to younger versions of the Lab Rats. When he finishes, Adam easily lifts the chair Davenport is in, and when he sets him down he drops the book. Bree takes the book and speeds away from Davenport, kicking up dust that causes Chase's senses to glitch and he sneezes, spraying Davenport with snot.

Davenport replaces them with robots, but in the lab as Leo is attacked by the robots after being hostile to them, it is revealed that they were the real Lab Rats, much to Leo's confusion. Chase explains that they had told the driver they forgot something and swapped the robots with them, and now they must act like robots whenever Davenport is around. The next morning during breakfast, Davenport and Tasha discuss to send the robots away to be recycled, much to Adam, Bree, and Chase's horrors. The real Lab Rats are actually sent to the recycling center and Leo's parents do not believe him when he tries to explain that they are real. Tasha calls Leo delusional since she thinks that he believes the robots are real, and Davenport tells his stepson that he had to let go of many friends, which Leo actually points out are action figures from the "Space Cantina", but Davenport calls them "fully-posable pieces of my heart". At the recycling center, Adam, Bree, and Chase work together to navigate through the course of crude obstacles, with time running out with the walls closing in behind them. Adam uses his strength to hold against the first obstacle as his siblings sneak underneath, and Bree uses her speed to transport her brothers through the second obstacle. The third obstacle is a large fire that Chase puts out with a glitch sneeze due to the burning trash's effect on his senses. Just as they finish the course, Leo falls through at the beginning, and screams as the wall closes in on him and all the obstacles begin to re-function. The Lab Rats fall back to the beginning, and as they start to run through the course, Leo finds the "off" button and pushes it. He successfully deactivates the course.

Davenport accuses the kids of going into a situation they could've seriously got hurt. He decides to give them another chance as long as they controlled their emotions so they didn't glitch. Right after he says that, Adam becomes overjoyed and starts accidentally blasting the room with plasma grenades from his hands. Upon realizing this, Leo states that his life got a whole lot better.

Donald tricks Tasha into kissing a robot version of himself, but the kiss causes it to malfunction and she yells at him. Donald then flees and the Lab Rats and Leo say "Ooh, busted!" 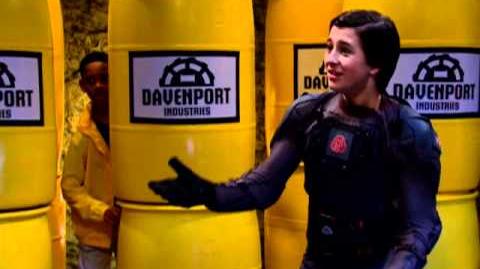 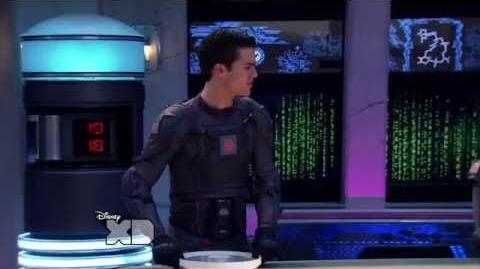 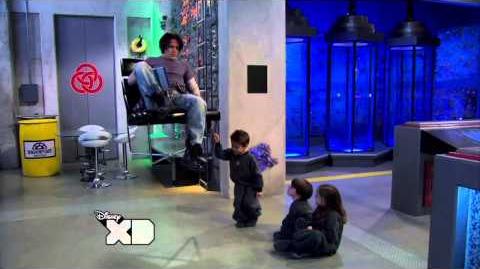 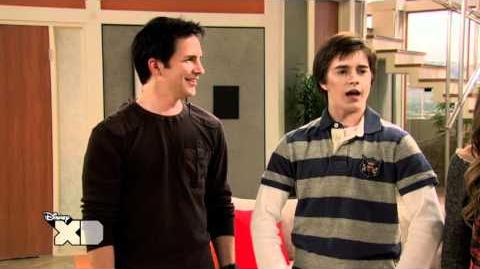