“Death Spiral Smackdown” is the 9th episode in Season 1 of Lab Rats. It first aired on June 7, 2012. It features the first appearance of Caitlin as well as the only appearance of Gordo.

Leo teams up with Adam in the school fitness challenge 'Death Spiral Smackdown,' hoping that Adam's bionic abilities will be his secret weapon, but the plan backfires when they end up going head-to-head in the finals. Meanwhile, Bree and Chase use their bionic abilities against one another when Chase tries to sabotage Bree when she is with her friends by making her speak French, Swedish and say strange things and making her slap her own face.

At Mission Creek, it's Perry's fitness challenge week and she decides to have the students do the Death Spiral Smackdown. Leo asks about the name and Perry has the vice principal demonstrate. Adam asks how it works and Perry tells him they had to wrestle while being spun around. Gordo wants to partner with Leo and tells him he always lost, but Leo tells him he wanted to win and was going to partner with someone else, telling him Adam was his secret weapon.

At home Leo is telling Bree and Chase about the smack-down, and asks if they wanted to watch, but Chase tells him they were going to the mall to look at the escalator. Bree tells him she had a test to study for and couldn't make it. Bree also stops Leo from eating some power pellets, which activate their bionics, but since they knew how to do it, they had stopped eating them.

Adam comes in and Leo tells Adam that he would distract people while Adam destroyed them, but Adam tells him it would be wrong to use his bionics for a school competition. Leo gets upset and ruins Adam’s cereal, telling him he would fix it, but he secretly puts in some power pellets.

At school Chase sees Bree isn't studying for a test and uses his bionics to hear what she was saying and finds out that she ditched him to hang out with her friends. He uses his 'Override App' that could shut down Adam and Bree's bionics and he shuts down Bree's bionics and makes her slap herself over and over, scaring her friends away.

During gym Gordo tells Leo he also had a secret weapon: a huge guy nicknamed Destructo. Perry explains the rules and has Adam and Leo fight against two other guys. Adam hangs onto Leo and steps on the spiraling circle and causes the other teammates to fly off, earning them a win.

Bree apologizes to her friends and they accept, but she starts speaking different languages, scaring them again. When they leave, Bree sees Chase and figures out what he was doing. She tells him she was going to use her bionics on him when he least expected it, but Chase wasn't scared.

Chase and Bree watch Adam and Leo during the smackdown and while Chase is distracted, Bree ruins his clothing and puts a clown wig on him. Adam and Leo go up against Gordo and Destructo, but Adam gets them to fly off the circle and they win. Adam wants to fight more people and Bree asks Leo what was wrong with him. Bree finds out Leo gave him power pellets and tells him that they would keep his adrenaline going until he wouldn't be able to turn his bionics off.

Leo tells her it didn't matter since they won, but Perry surprises him by telling the class about the finals, saying Leo and Adam had to go against each other. At home Adam asks Leo if he seemed jittery and when he tries to sit down, he breaks the chair. He wants some more of the cereal, but Leo attempts to stop him from eating it.

Bree and Chase come in and Leo tries to get Bree to help him with going against Adam. Bree tells him to quit, but Leo doesn't want to, so Bree tells him the pellets would wear off eventually. At school the next day, Chase has thirty-six items of clothes on and Bree is wearing aluminum on her neck to deflect Chase's override app from her chip. Bree sees people laughing at them and Chase blames her for it since she ditched him, but she tells him it was because Caitlin was her first real friend.

Leo tells Perry that Adam was so sick he could barely move. Meanwhile, in the lab, Adam wakes up and tries to open the door of his capsule, but he can't at first because Leo locked him in. He breaks out of it and shows up at school just as Perry is about to award Leo with the trophy. Adam grabs Leo and is about to to throw him, but Bree tells Chase about what Leo had done and gets Chase to use his override app.

Chase gets Adam to gently put Leo on the ground. Adam is confused as to why he wasn't destroying Leo and though Leo doesn't know, he pushes Adam off the circle and gets the trophy. Gordo congratulates Leo and tells him he had been rooting for him to win and gives him a cape he had sewn for him. Adam tells Leo that Chase told him about the pellets and that nothing could fix their friendship, but forgives him when Leo gives him the cape.

Later, Adam is talking to Chase about the override app and thinks Chase was the reason he had been doing stupid stuff all those years, but Chase tells him Adam had been the one doing that. Adam tells him not to do it anymore and Chase tells him he wouldn't be able to get Adam to do things like dancing and they do the chicken dance. Chase ends the connection but Adam is still dancing. Adam tells him he just liked the dance. 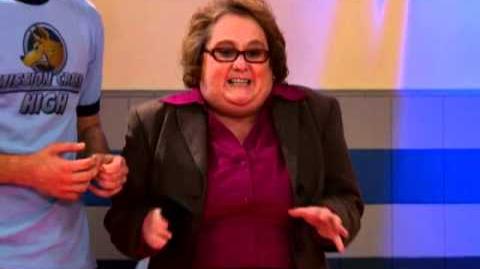