Geo-leaping is the bionic ability for a user to molecularly transfer, or teleport, themselves, and others they are in physical contact with, from one place to another by thinking about the destination and without occupying the space in between, allowing them to vanish completely from one area and reappear in their destination.

Geo-leaping was debuted in the episode Parallel Universe by Parallel Leo. It was used again by Victor Krane in Season 3. Geo-leaping can be used to bypass any obstruction, but Donald's security fence can block a person's geo-leaping (Taken). If the user wants to leave anything behind, he has to be conscious about it, or he will end up taking anything in contact if caught off-guard. 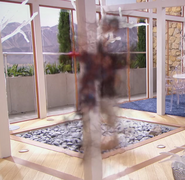