Madison Pettis
Janelle is Leo's crush, girlfriend, and future wife in alternate timeline (Back From the Future). She sometimes appears to be charmed by his intentions, but most of the time, Leo makes her puzzled by his actions, and is often controlling of him.

She is portrayed by Madison Pettis.

Leo acts smart to get with her. She says that she likes comics, like him (Can I Borrow the Helicopter?). It is revealed by Future Leo that she and Leo still date in the future. She is a big fan of basketball (Air Leo). She was supposed to go on a date with Leo to a movie, but due to Leo's siblings' appending death, they didn't (Back From the Future). When Leo tried to make things work with her, it didn't work and she's still mad. In Avalanche!, Leo invites her over to study and is surprised that she actually showed up. Trying to impress her, he accidentally freezes her with Donald's Cryo-Blaster that Tasha told him not to touch.

In Prank You Very Much, Leo's Grandma comes to visit and immediately dislikes Janelle. It was her and Leo's 150th day anniversary since she talked to him, telling him to get out of the ladies restroom. In Back From the Future it was revealed that they will be a couple someday. In the episode, Mission: Mission Creek High, it is revealed that she is quite superstitious, and that Leo is the source of her bad luck, especially in Armed and Dangerous, when Leo did rapid fire with his bionic arm and nearly killed Janelle. 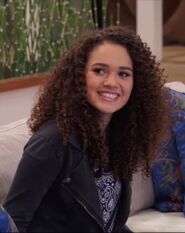