Chase Davenport
Sebastian
Laser Bo is a hidden ability which allows its user to generate a solid light laser-like weapon that resembles a lightsaber, the a strike from it being able to blast an opponent as resilient as Adam into the air at great speed and stun them, though it possibly require a harder hit to do this, as weaker strikes barely stuns an opponent.

There is more than one user with different styles of weapon generations, such as its bo staff and Bident variants. The user can hold and maneuver the weapon as it is were solid, and can throw it in the air and catch it again.

It can be deactivated when being knocked onto the ground or stunned. This was noticed when Chase was fighting Sebastian (S-3) in a Laser Bo fight. In addition, beings with Energy Transference, such as The Incapacitator, can cause the Laser Bo to backfire on the user. Despite being an energy weapon, it cannot cut through solid objects, as Grey Granite's staff can parry it.  In EF, Bree stated Chase's Laser-bo can slice someone in half. 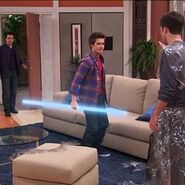 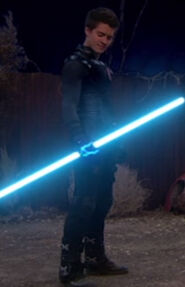 Chase takes out his Laser Bo [2]

The first time Chase meets another person with Laser Bo [2]