Chase Davenport
The Magnetism App is one of Chase Davenport's bionic abilities. This is shown when he turns his hands into a magnet, attracting or repelling metal objects.

It was first seen in Chore Wars, when Chase uses his Magnetism App to get his briefcase from Bree. The second appearance of the app was in Sink or Swim. In this episode, Chase uses it to escape the titanium rings that Douglas held him, Adam and Bree in. He used the Magnetism App along with his Molecularkinesis at the same time (also known as Two Simultaneous Abilities).

In Bionic Action Hero, Chase uses it on Troy West, by using reverse polarity. He uses the app again in the episode, The Curse of the Screaming Skull, when he was infected by the virus. He uses the Magnetism App to control the knives in the Mentor Quarters.

Chases uses the Magnetism App on the breifcase in Chore Wars. 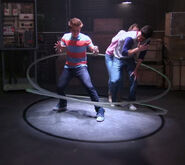 The Magnetism App being used along with Molecularkinesis to destroy the titanium rings.

Magnetism App in The Curse of the Screaming Skull