Otis is a dog who appeared in Bionic Dog. He is the first pet in the cast of Lab Rats. Otis had bionic powers. Otis was Douglas's long lost dog, until he one day showed up on the island. Sometime after the events of Taken,Victor Krane tampered with Otis's bionic chip to destroy Douglas, and would do so even after Krane's supposed death. Chase is allergic to him.

He is portrayed by Jumpy the Dog.

After the incident in Bionic Dog, his abilities have been completely removed due to the chip removal. 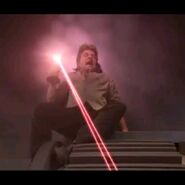