Victor Gonzalez
"The Jet-Wing" is the 3rd episode in Season 3 of Lab Rats. It first aired on February 24, 2014. This is the 49th episode overall.

Donald attempts a death-defying stunt to raise money for a new lab. Meanwhile, Perry forces Adam and Bree to be her bionic servants, using them as blackmail for keeping their secret.

With the lab gone and capsules destroyed, Adam, Bree, and Chase are at the risk of glitching. To prevent this, Donald tries to earn money for a new lab by performing a death-defying stunt in the air. Leo finds a sponsor, Go-Go Global Pack and Ship. Meanwhile, knowing the Lab Rats' bionic secret, Principal Perry takes advantage of the secret by turning Adam and Bree into her bionic servants. Tasha does an exclusive pay-per-view webcast about Davenport's flight. After spending most the day using bionics to serve Perry, Adam and Bree begin to glitch. Donald begins to stall before he takes off, obviously nervous. Leo makes him fly by pushing a button but things quickly go wrong when Donald loses his parachute. The Lab Rats do their best to prevent Donald from crashing. Adam and Bree arrive at the lot. It is shown that Bree and Adam are glitching, Bree being jittery, and Adam wearing a hubcap to stop his laser vision. Chase and Leo are sure that there is no way to save their dad, and are beginning to accept defeat, when Adam shows Donald's parachute to the group, which he mistook as a 'tote bag'. Leo suggests that Chase uses Adam's strength to launch the parachute back to Donald.

They go with the plan, but when Adam removes the hub-cap to see if the parachute was caught, he accidentally shoots a laser at Donald's jet wing, causing the wing to break off and making the jet wing go out of control. The Lab Rats quickly brainstorm and come up with the idea of building a crash-pad for Donald to land on and for Chase to use his molecular kinesis to slow his descent. The plan is quickly put into action and a crash-pad is built. Bree's glitch worsens and Leo uses a package bag to keep her in her spot from speeding around. As Chase begins to use his molecular kinesis on Donald, he glitches. Donald is going from either being steadied by Chase's molecular kinesis, or free falling from the sky. Chase faints, his glitch overwhelming him and Donald lands on Principal Perry instead of the crash-pad that was built.

Donald now has a broken arm and leg while Principal Perry is in a body cast and gets hailed as a hero. Donald reassures that they will get enough money for a new lab soon, and Leo adds, "The sooner the better". The episode ends with the camera on Adam, Bree and Chase each suffering from their own glitches. 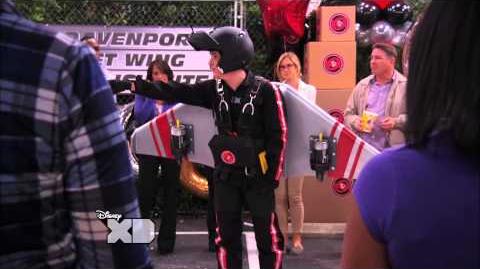