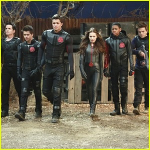 ~My favorite show is Lab Rats. Though you probably can tell because of my username. XD. :D

~My favorite character on Lab Rats is Chase, Though I will go against him if what other people are saying are sadly true. I do take is side on mostly everything though.

~My favorite character on Mighty Med is Kaz. Oliver is a close second though.

~Lab Rats vs. Mighty Med and Bionic Action Hero are my absolute favorite things ever!

~I honestly think Brase is adorable, PLATONICALLY. I believe that they are real siblings and think that their sibling relationship is adorable. :D

~My favorite color is blue.

-Concert in a Can

-Prank You Very Much

-Rise of the Secret Soldiers

-Bionic Action Hero (most favorite out of every episode.)

Retrieved from "https://lab-rats.fandom.com/wiki/User:LabRatsGirl57?oldid=160384"
Community content is available under CC-BY-SA unless otherwise noted.